Autism and Early Intervention; What Works and How Well?

Forty-eight children diagnosed within the autism spectrum, between 18-30 months of age, were randomly assigned into one of the two groups, and assessed at one and two-year follow-up.

What was the intervention?

The ESDM model integrates applied behavior analysis (ABA) with developmental and relationship-based approaches. The intervention was provided in the toddler’s natural environment (the home) and delivered by trained therapists and the child's trained parents. The children received, on average, 15 hours per week of this intervention. The Assess and Measure (A/M) group received an average of 9.1 hours of individual therapy (S/L and OT) and an average of 9.3 hours per week of group interventions (eg, developmental preschool).

After the first year of treatment, both groups showed improvement, but the ESDM group improved a whole lot more. There was even more improvement after two years. In that regard, the ESDM kids increased in IQ by 17.6 points, A/M by 7.0. This increase was largely due to gains in receptive and expressive language (18.9 and 12.1, respectively) compared to 10.2 and 4.0 for the A/M group. Moreover, adaptive behavior scores remained stable for the ESDM group, but tended to decline (regress) in the A/M group. Furthermore, children in the ESDM group were significantly more likely to improve in diagnostic condition (move from Autistic Disorder to PDD, or progress to not having a diagnosis at all) compared to the A/M group (29.2% progressed compared to 4.8%).

What to make of this?

Seems pretty clear that early intervention is vital; both groups demonstrated improvement. However, the kiddo’s receiving more intensive intervention based in the ESDM model, which appears to incorporate elements of discrete trial, verbal behavior, and RDI, demonstrated significantly greater progress. It’s worth noting that the children received intervention from therapists and the parents were trained in the techniques and carried-out the strategies independently, which is vital for parents to consider given the ongoing cut-back in services. It’s imperative for parents to learn how to implement strategies and do so when any opportunity presents in the natural environment. In the meantime, continue to fight for your child’s services, recognizing that the traditional approaches (OT, S/L, and specialized preschool) are very helpful, but not as effective as the more intensive and individualized treatment that based in applied behavioral analysis. It would seem logical that a combined approach is even more helpful.

Feel free to comment at jcarosso@cpcwecare.com; I’m also available for evaluations and consultation.

A Prayer a Day Keeps Anger Away…?

Do You Want a Smart, or Wise, Child? 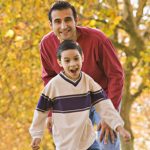 Bolstering Your Child’s Self-Esteem: Part II- Relationship with You